Shaun Tighe died suddenly on November 11 2013, while visiting the Falkland Islands as a member of the South Atlantic Medal Association. The former marine, known to many as Tiggy, was on a week-long trip making his ﬁrst visit to the Islands since the 1982 war. The 60-year-old from Bittern Way, Letchworth GC, had taken part in the Remembrance Sunday parade with other veterans and spent Monday laying wreaths at some of the memorials in Stanley. Mr Tighe was due to go out for the evening but was found by a concerned friend at his hotel after the veteran, who was a stickler for time, failed to show up. His sister Ilse Sharp said: "It’s ironic to think my brother came home safe and well after the war in 1982 only then to return and die. But I know he was where he wanted to be and I know how much he was looking forward to seeing the islands again."

At a service held at the Royal Marines Memorial near Government House the Reverend Dr Richard Hines who led the service, expressed the shock and sadness all the community had felt at the unexpected and sudden nature of Tiggy’s passing and offered his condolences to the family and to those who knew Tiggy well and who served with him as part of the NP8901 detachment in 1975-76. He said: "For a man who himself served and fought bravely for the freedom and liberation of these Islands, in particular by his part in selﬂessly seeking to defend nearby Government House, there was perhaps no more ﬁtting last act he could have undertaken before he died than to visit the Memorial Wood in Stanley and lay a wreath in memory of his fallen comrades.” Mr Tighe worked as a resident social worker at Orchard House in Letchworth GC, working with people with learning difﬁculties. He was unmarried and is survived by his sisters Ilse and Daryl, and brother Leon. 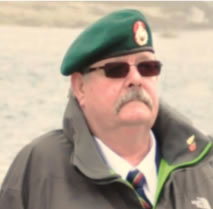