You may be aware that this morning the UK government published a Written Ministerial Statement (WMS) about negotiations with Mauritius on the exercise of sovereignty over the British Indian Ocean Territory (BIOT).

The FCDO have emailed the FIA Chairman, Russell La Forte, with the following message:

Press Release 031122was also released by the Falkland Islands Government:

Members of the Legislative Assembly would like to comment on the announcement made today by the UK government over the decision to begin negotiations on the exercise of sovereignty over the British Indian Ocean Territory(BIOT)/Chagos Archipelago.

The decision made over the BIOT/Chagos Archipelago, while relating to sovereignty, cannot be compared to the Falkland Islands.

Falkland Islanders clearly stated their desire to remain a part of the UK overseas family in the 2013 referendum, when 99.8% voted for the Islands to remain a self-governing UK Overseas Territory. We remain a diverse, resilient and peaceful community that has prospered over time, thanks to the pioneering efforts of the people who travelled here from across the globe, with some families being able to trace their heritage back 9 generations. We are not an isolated enclave at the tip of South America, but a strong, self-determined democracy.

The Argentine Government will likely attempt to use this decision as an opportunity to support its colonial aspirations towards our home. However, no one can rewrite or overwrite the evidence of history or the human rights of the Falkland Islanders. The illegal Argentine invasion of our peaceful Islands 40 years ago, which resulted in the loss of almost 1000 lives, has not been forgotten. We have ensured that in 40thyear since our liberation we have celebrated how far we have come as an Island nation while being a part of the UK overseas family.

A further Press Statment was made by Her Excellency The Governor of the Falkland Islands, Alison Mary Blake CMG: 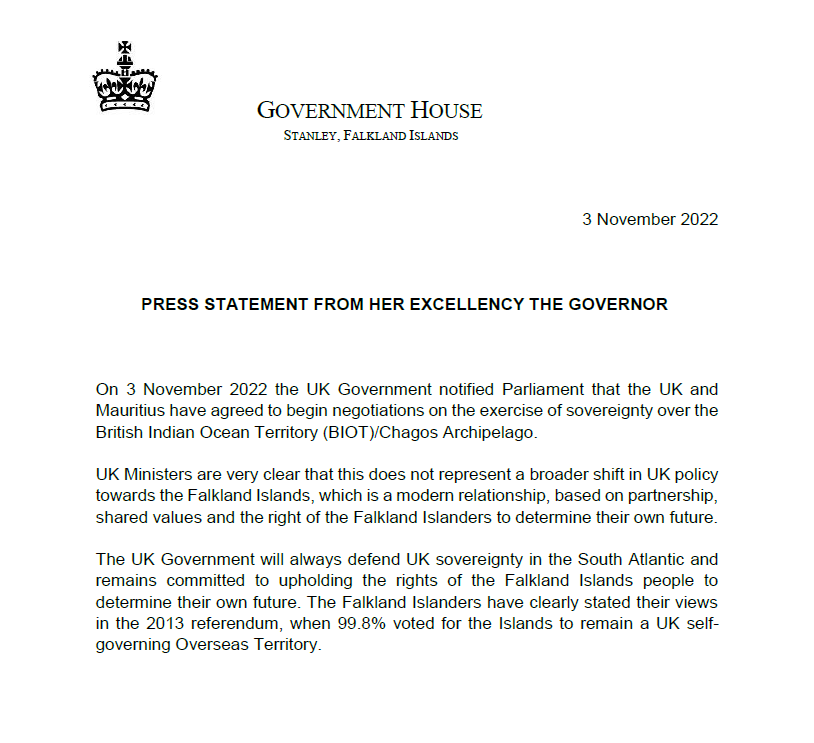