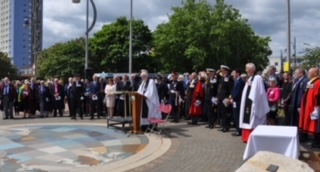 Falklands War veterans met over last weekend to mark the 40th anniversary of the 1982 War.

Events began on Saturday evening in Portsmouth with a small parade and service by veterans and families of HMS Coventry, which was lost in the war. Wreaths were laid and a small service held at the Coventry monument. The reunion was led HMS Coventry Association Chairman Chris Howe MBE and Coventry’s Captain David Hart Dyke CBE, LVO, ADC. The service was conducted by the Reverend Martin Kirkbride OCM. The names of all the 20 fallen crew members were read out and honoured.

A much bigger event took place on the Sunday morning in Gosport at Falklands Gardens by Portsmouth Harbour. This was organised by the Falklands Veterans Foundation, which is based in Gosport, and whose chief executive, Derek "Smokey" Cole, served on board HMS Intrepid in the war. He said: "The veterans of the conflict are all very humbled to have received the Freedom of the Borough in 2005 and are delighted to be able to parade through the town once again, on this special year. There were many servicemen and families living in Gosport in 1982 who became involved in the conflict and sadly some did not return from the South Atlantic but will always be remembered."

The reunion was sponsored by Gosport Borough Council, Hampshire County Council and many other service and civilian organisations. There was the band of the Royal Marines, a contingent from HMS Sultan, naval cadets, and hundreds of veterans of the Falklands War, who all formed up nearby and marched into position.

The Mayor of Gosport Councillor Jamie Hutchison opened proceedings with a welcome address. This was followed by a service led by the Reverend Godfrey Hilliard MA, Chaplin of 40 Commando, Royal Marines in 1982, and the Reverend Bernard Clarke RN, of Holy Trinity Church, Gosport. Many military and civic dignitaries took part, as did Mr. Richard Hyslop, Falkland Islands Government Representative in Britain.

The Naval Hymn “Eternal Father, Strong to Save” was sung. Mayor of Gosport Jamie Hutchison read the lesson and the address was made by the Reverend Hilliard.

The names of every one of the 255 servicemen who fell in the war and the three Falkland Islanders who lost their lives were read out. Flowers were laid for each one of them.

The band, naval contingents and the hundreds of veterans then marched up Gosport High Street to the cheers of hundreds of people. The salute outside the Town Hall was taken by Mayor Jamie Hutchinson, Lord-Lieutenant for Hampshire Nigel Atkinson, and Falklands War veteran Admiral Sir Philip Jones, formerly Chief of Naval Staff and First Sea Lord.

A reception for the hundreds of veterans, their families and invited guests followed. 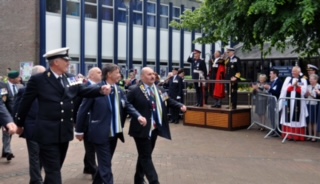