Argentina is gearing up to commemorate the 200th anniversary of the visit to the Falklands by the Privateer Captain David Jewett in 1820, when on 6 November he purported to “take possession” of the islands for Argentina. To contradict this, Falklands historian Dr. Graham Pascoe has released the paper: David Jewett’s visit to the Falklands, 1820-21: no valid “possession-taking”. This may be seen on the website www.falklandshistory.com.

Dr. Pascoe notes that before David Jewett arrived he had captured a neutral Portuguese ship, and he captured another neutral US ship in the islands. Dr Pascoe writes: “The capture of neutral ships ended Jewett’s role as a Privateer and made him into a Pirate (Privateers were legally entitled to capture only enemy ships in time of war). Accordingly, Jewett himself, his ship and his successor as Captain, William Mason, were later condemned for Piracy by a Portuguese Court; their ship was confiscated and sold, and Mason and the crew were imprisoned in Lisbon”.

Pirates were outlaws everywhere in the world, and all their actions were illegal. So there was no valid “possession-taking” of the Falklands in 1820, despite anything Argentina may claim.

The Argentine Government did not order David Jewett to take possession of the Falklands. In the long report of his voyage that Jewett wrote in February 1821, just before leaving the Falklands, he did not mention that he had taken possession of the Islands. If he had orders to do so, he would not have omitted to mention that he had carried thoses orders out. Argentina only found out that he had claimed the Falklands from reports in the English-language press, which were not published in Buenos Aires until 10 November 1821, just over a year after the event.

Jewett left Argentine service in 1822 and moved to Brazil, where he became a bitter enemy of Argentina. 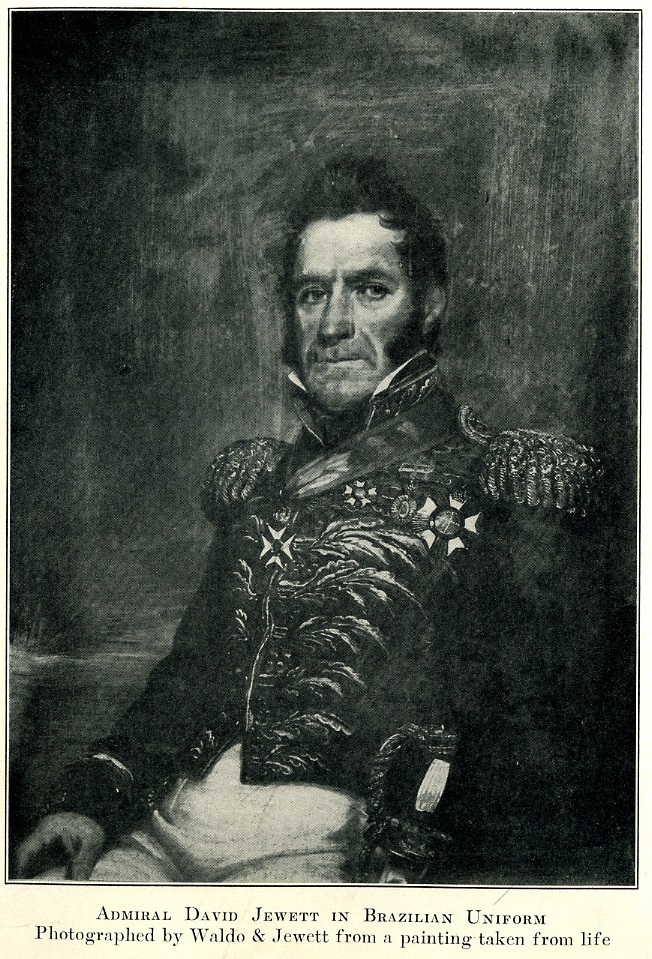 “David Jewett (1772-1842) This is the only known portrait of Jewett. It depicts him in Brazilian uniform after 1822, when he left Argentina for Brazil and became a bitter enemy of Argentina”.