Air Chief Marshal Sir Peter Squire GCB, DFC, AFC, DL, a veteran of the Falklands air war in 1982, died unexpectedly at home on 19 February 2018, aged 72. He is succeeded by his wife, Carolyn, and their three sons.

In 1982, the then Wing Commander Peter Squire AFC, commanded the RAF’s No 1 Squadron of Harrier jets at RAF Wittering, when he was tasked to join the Task Force in Ascension. Transported to the war zone on Atlantic Conveyor, his planes transferred to HMS Hermes just two days before Atlantic Conveyor was sunk by Argentine Exocet missiles. During the conflict, his squadron of ten Harriers was in the thick of action, flying over 150 sorties (two a day for each pilot) – four were brought down, three damaged and only three Harriers survived unscathed.

Sir Peter had his own narrow escapes. He had to crash land at Port St Carlos and then just before the end of the war, his plane took a bullet through the cockpit which could have killed him – and after the war, he had to eject before his plane crashed into the sea off Cape Pembroke because of engine failure. Sir Peter also led a sortie against the airstrip at Dunnose Head, which left a now prominent Falkland Islander blinded in one eye because of shrapnel; both subsequently became firm friends.

Sir Peter led the first RAF squadron to operate from an aircraft carrier in conflict since the Second World War and he was the first to launch a laser-guided bomb in combat. He was awarded the DFC for his bravery during the conflict. His career afterwards took a steady path towards the topmost post as head of the RAF in 2000 - 2003, when he retired. Sir Peter was the first front-line officer of the Falkands War to become the head of one of the three armed services (followed by Admiral West, who commanded the ill-fated HMS Ardent).

In late 2002, Sir Peter visited Argentina to meet the Argentine Air Force Chief, General Walter Barbero, who had flown Boeing reconnaissance aircraft against the Task Force during the Falklands war. General Barbero returned the flying documents of Lt. Nick Taylor RN, who was shot down and buried by the Argentines at Goose Green. 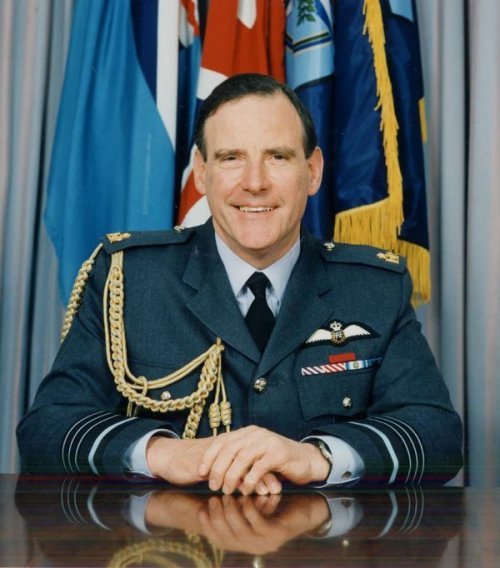