He was Canon in Stanley from 1987 to 1991, a Lieutenant of the Royal Victorian Order and was a former Chaplain to Her Majesty the Queen,

In an obituary for Canon Murphy, journalist Michael Pollitt for Eastern Daily Press reminds us that the Canon was formerly an international rugby player for Ireland, capped six times, winning his ﬁrst cap in 1951 against South Africa at Lansdowne Road, Dublin. In a career spanning almost a quarter of a century, he rose to become one of the Army’s most senior Chaplains before taking up rural ministry as Vicar of Ranworth and also chaplain of the Broads in 1977.

Born in 1926, in Bangor, County Down, Northern Ireland, John Gervase Maurice Walker Murphy, went to Trinity College, Dublin, and was ordained a Deacon in 1952 and a Priest a year later. It was while the fullback was playing for Dublin University, he won his ﬁrst cap. The following spring, he was one of two novice Priests playing for Ireland. He also won caps for Ireland against Scotland and Wales and in 1954 represented his country against the All Blacks. In 1958, while playing for London Irish, he was capped against Wales. He graduated with a BA and became MA three years later. For three years, until 1955, he was Curate of Lurgan. Then he became a Chaplain to the Forces, serving in Korea, Malaya, Aden and Cyprus. Between 1973 and 1975, he was assistant Chaplain-General to the British Army of the Rhine. In his ﬁnal army posting, he was assistant Chaplain-General for the army’s south-east district, based at Aldershot. At Ranworth, he became the Bishop of Norwich’s chaplain for holidaymakers on the Norfolk Broads. Two years later, in 1979, he became domestic Chaplain to the Queen. He was instituted as the Rector of the Sandringham group of eight parishes by the Bishop of Norwich, the Rt Rev Maurice Wood and was inducted by the Bishop of Lynn, the Rt Rev Aubrey Aitken.

Rev Murphy was appointed an honorary Canon of Norwich Cathedral in June 1986. In October the following year, he announced to his congregation at Sandringham that he was, "honoured and surprised” to be appointed to the post of Rector at Christchurch Cathedral in the Falklands. For the next four years Canon Murphy ministered not only to the civilian population and military personnel on the main island, but also to those parishioners – 1,900 in all – who lived on an archipelago of 200 other islands in the region. Boats, helicopters and light aircraft were necessary tools of a ministry he greatly enjoyed and which is still remembered with gratitude by Islanders. The contrast between this and the Chaplaincy of the Royal Chapel in the Tower of London, to which he moved in 1991, could hardly have been greater. His ofﬁcial duties in the latter post were not heavy. But during his ﬁve years there he made good use of the opportunities afforded by the post, conducting the services, pastoring the Beefeaters and other members of the staff, welcoming the huge number of visitors and making his presence felt in the City, where he was Chaplain to the Lord Mayor in 1993-94. He leaves his widow and ﬁve daughters: Maryan, Desiree, Nicola, Geraldine and Felicity, and 17 grand-children. 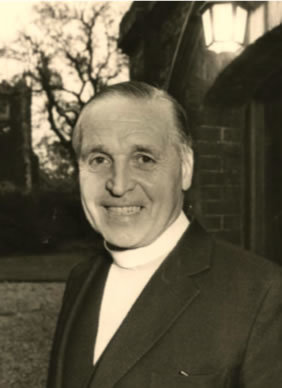