Those in the Islands who remember John Huckle will be saddened to learn that he passed away on December 9 2013, aged 89. John was described by the Lancashire Telegraph as a wartime 'star' having been awarded the Arctic Star in November to mark his work on the HMS King George, ﬂagship of the Home Fleet based at Scapa Flow during World War II, deployed to counter German capital ships poised to threaten the Arctic convoys. He joined the Royal Navy in 1941 and once commented, "When the Japanese heard I had become a member of our Armed Forces, they retaliated the next day by bombing Pearl Harbour". Following ofﬁcer training, he was appointed Anti-Submarine Control Ofﬁcer of HMS Calder.

The ship was credited with the destruction of the German U-boat U1051 off Anglesey in January 1945 for which John was awarded the Distinguished Service Cross and, later, U774 off south west Ireland which earned him a bar to his DSC. He remained aboard HMS Calder for 20 months before being transferred to the Submarine Service in 1945 serving aboard HM Submarines Vulpine and Springer, ending his wartime service in September 1946. Searching for employment he came across an Assistant District Ofﬁcers post in the African Gold Coast (Ghana) and after passing the entrance examination he was destined to sail from Liverpool in October 1946, and had in fact purchased the necessary kit including mosquito nets and solar topees, when he chanced to see an advert in a London newspaper calling for, "young men, single, tough, and not afraid of loneliness," to participate in an expedition organised by the Colonial Ofﬁce to explore the Falkland Islands Dependencies (now the British Antarctic Territory). This seemed to him to be too good to be true, so that very afternoon he postponed his career as a tropical administrator and was seconded to the Falkland Islands Dependencies Survey (FIDS) and was instructed to sail from Tilbury just ﬁve days later. On arrival at Tilbury he found that the ship bound for the Falkland`s was the RMS Lafonia which had been acquired by the FIC to improve communications between Stanley and Montevideo.

The Lafonia was formerly SS Perth and John recalled that she had been in a convoy protected by a destroyer escort in which he had been serving. Amongst the passengers on board for the Falklands was the Governor-Designate Miles Clifford who had been the Chairman of the interview panel when John joined the Colonial Service and he demanded to know why he had not taken up the post in the Gold Coast. Later during the voyage south Governor Clifford summoned John to his cabin and explained that when he reached the Falklands he would require a personal Aide-de-Camp (ADC) and he would like John to take it on. That put him in a quandary as he was greatly looking forward to exploring the Antarctic and was not at all sure he wanted to strut around as an ADC as he had just spent ﬁve years in the Royal Navy continuously in uniform and that had been long enough. After considerable consideration he accepted the Governor's proposal.

Following just three months in post as ADC John learned from the Governor that he would be travelling to Antarctica after all. He sailed early in 1947 aboard the Trepassey with instructions to visit a number of the FIDS bases including Deception Island, Port Lockroy and the Argentine Islands and returning to Stanley on the RMS Fitzroy. In the event however, although he was initially planning to remain in the Antarctic just three weeks he eventually remained down south for three years after being marooned at Stonington Island due to ice conditions in Marguerite Bay preventing the relief ship from arriving. Among the many adventures he experienced in Antarctica he was credited with being the ﬁrst British subject to advise a visiting Argentine warship that they should have obtained permission before entering British Territorial Waters.

Upon returning to Stanley, John was hoping to have a few weeks holiday at least, but Governor Clifford had other ideas and immediately assigned him to take the ketch Penelope on a trip around the farms together with staff from the Posts and Telegraph Department to install radio telephone sets to improve communications between Stanley and Camp settlements. He then remained as Skipper of the Penelope for a few more weeks transporting sand across San Carlos Waters to assist in the construction of the freezer plant at Ajax Bay. Governor Clifford then decided to make John Harbour Master and Director of Civil Aviation and as the Falkland Islands Government Air Service had only just became established and with only one pilot he then asked John if he would agree to travel back to the UK to obtain a pilot`s licence. This he successfully achieved in just a few months and for the next few years he ﬂew for FIGAS and in addition assisted with the training of Ian Campbell who was to become the ﬁrst local pilot to ﬂy for FIGAS. Although John was much appreciated for his piloting of the FIGAS aircraft, he was not always popular with the hangar staff when making the ﬁrst take off from Stanley in the very early mornings during the summer months to enable more ﬂying to be carried out as it was usually calmer in the early mornings as the wind in the Islands tended to increase as the day went on. Finally after ﬂying the Auster, Norseman and the Beaver ﬂoat planes with the latter being the most suitable for the Falkland's environment, in fact this aircraft was successfully operated by FIGAS as a ﬂoat plane for more than a quarter of a century, John ﬁnally retired from FIGAS and left the Islands after being in the South Atlantic region for almost ten years.

This however was not his ﬁnal visit to the Falklands as he returned in November 1956, this time as the Second Ofﬁcer on the Oluf Sven the support vessel for the Falkland Islands and Dependencies Aerial Survey Expedition. The purpose of this organisation was to ﬁlm the Antarctic Peninsula and the Falklands, operating two Cansos ﬂying boats, with the aim of producing maps for both areas. Just a year or so later John returned, yet again, to the South Atlantic, but this time ﬂying helicopters to look for whales for Salversons the Norwegian whaling company based in South Georgia. John served as a warden at Salmesbury Hall, Preston in Lancashire in his latter years. His funeral took place on Monday December 23, 2013, at the Forest of Dean Crematorium. 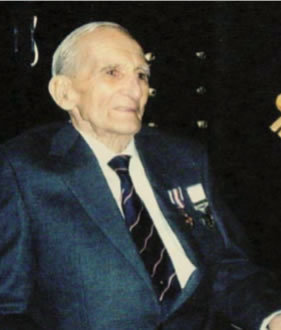