James Martin Clarke universally known as 'Mick' or 'Mickey', was born on January 25, 1932. He was third of the four children born to 'Jim' and Jane Clarke of Pioneer Row, in Stanley, and is survived by his younger brother, Rudy. At the age of 5, just before Rudy was born, came the devastating news that his father Jim, had died aged 41 while working out on the harbour on the schooner Shamrock. Mick's ﬁrst proper job working with skipper Sandy Bonner on the celebrated AK Ilen, and John Allan recorded Mick's name in what John called 'the Albemarle Roll of Honour'; those who worked for the South Atlantic Sealing Company between 1949-1952 along with colleagues such as Riley Short, Dave Thom and Fin Finlayson.

Other jobs followed including a year or two on the RSS Shackleton and a spell as a delivery driver for the FIC, but eventually Mick settled with the Falkland Island Government's Public Works Department (PWD)where he would end up as Foreman and one-time Peat Ofﬁcer. Mick steadily gained other experience too, besides working with vehicles. He was comfortable working safely at height and so was ready and willing to paint tall radio masts. He painted the tin roof of the Cathedral Church suspended from a bosun's chair. He was responsible for the positioning and installation of Britannia on top of the 1982 Liberation Monument.

He was soon known as a very fair foreman at PWD and was popular with his men. But whatever employment he was involved in over the years, and however much he enjoyed doing it, he was never happier than when he was huntin’, ﬁshin’ and gatherin’. It soon became the custom to announce on the radio when Mickey Clarke had ﬁsh for sale down at the Public Jetty. Sometimes he sold it; and sometimes it seems he gave it away out of the kindness of his heart. Together with kindness, the theme of courage also emerges the more one hears about Mickey’s various occupations and exploits. It is a tricky thing to take a boat to sea around these Islands; especially when you get caught in rough weather or a storm. In some ways it was an even trickier business to deliver supplies overland to Camp settlements during the Argentine occupation in 1982. But Mickey did both and many were and remain profoundly grateful for it. 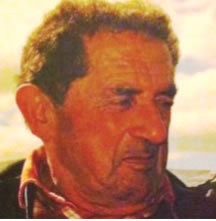