Ray was the ﬁrst person I met at Hill Cove, more correctly he met me, like the hundreds of others he greeted or said farewell to as they arrived or departed on planes, be they Beavers or Islanders. It was a job he did in his working life, and in retirement. Ray had so many skills. He could cut tussac or peat, or pull down a house and rebuild it, he could shear with both hand and machine shears, and class wool. In the days of dipping when we brought the sheep down off the mountains he did the drafting, drafting three ways up to three thousand sheep an hour. How fortunate I was to have a friend and helper so proﬁcient in all the tasks occurring in camp.

As a big farm Ray cared for the settlement as if it were his own, even after split-up he made every effort to keep it neat and tidy. Ray looked after the water supply to the Point settlement ensuring that the ﬁlter at the dam was not blocked and if there was an airlock he knew where to bleed the pipe - how many times did he hear the cry: "Ray, I’ve got no water." When Hill Cove no longer had a storekeeper/bookkeeper he took over running the store and when the farm was split up he took over the stock and continued to keep it running.

He always said he broke even or made a small proﬁt, but on the occasions when he asked me to check his ﬁgures I could not ﬁnd a proﬁt. Most of all I will remember the person he was - if something tickled his sense of humour he became helpless with laughter, his eyes screwed up and tears ran down his cheeks. I never knew him to be too busy to stop what he was doing and give a helping hand. When the farm was split up and Sally and I took on one of the sections he never said no if I called him and asked if he could help with whatever it was we were doing. It was not just the people of Hill Cove he helped, he and Dene looked after all and sundry who arrived on their doorstep, be they Phantom pilots, refuellers, stray military, and local visitors. West Falkland will miss him. 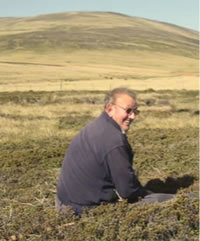