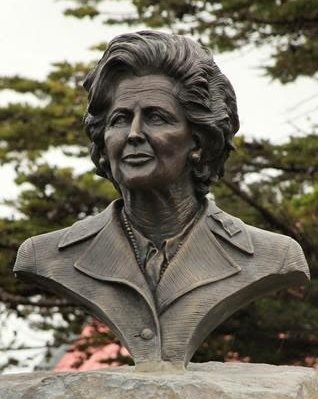 Falkland Islanders commissioned Falklands-based sculptor Steve Massam to carry out the work following the death of the former Prime Minister in 2013. The sculpture is mounted on a stone plinth which carries a plaque that has a quote from Baroness Thatcher from 3rd April, 1982 when she said, 'They are few in number, but they have the right to live in peace, to choose their own way of life and determine their own allegiance.'

The work has been placed at the end of Thatcher Drive, close by the Liberation Monument, which honours the 255 UK servicemen and three Falklands civilians who died in the conflict.

The work was unveiled by Baroness Thatcher's son, Sir Mark Thatcher, on Margaret Thatcher Day. He said, "I am extremely honoured to be in the Falkland Islands to unveil the bust of my mother who I know would be equally honoured and very humble that you, the Falkland Islanders, have bestowed upon her such an honour.”