A commemorative service was held at the Admiralty church of St. Martin-in-the-Fields, off Trafalgar Square, at 11.00 am on Monday, 8 December to remember those who fought in the battles of Coronel (1 November 1914) and the Falkland Islands (8 December 1914).

The service was attended by over 400 people including representatives of the British and German navies, Service organisations and Ship Associations, as well as descendants of those who took part in the battles. Those officiating at the service included the Rt. Rev'd Nigel Stock (Bishop for the Falkland Islands and Bishop to the Armed Forces), Chaplain of the Fleet, the Rev'd Scott Brown and Rev'd Annegret Wirges, the German Military Chaplain in Brussels.  Bishop Stephen Venner (former Bishop for the Falkland Islands and to the Armed Forces) gave the address. 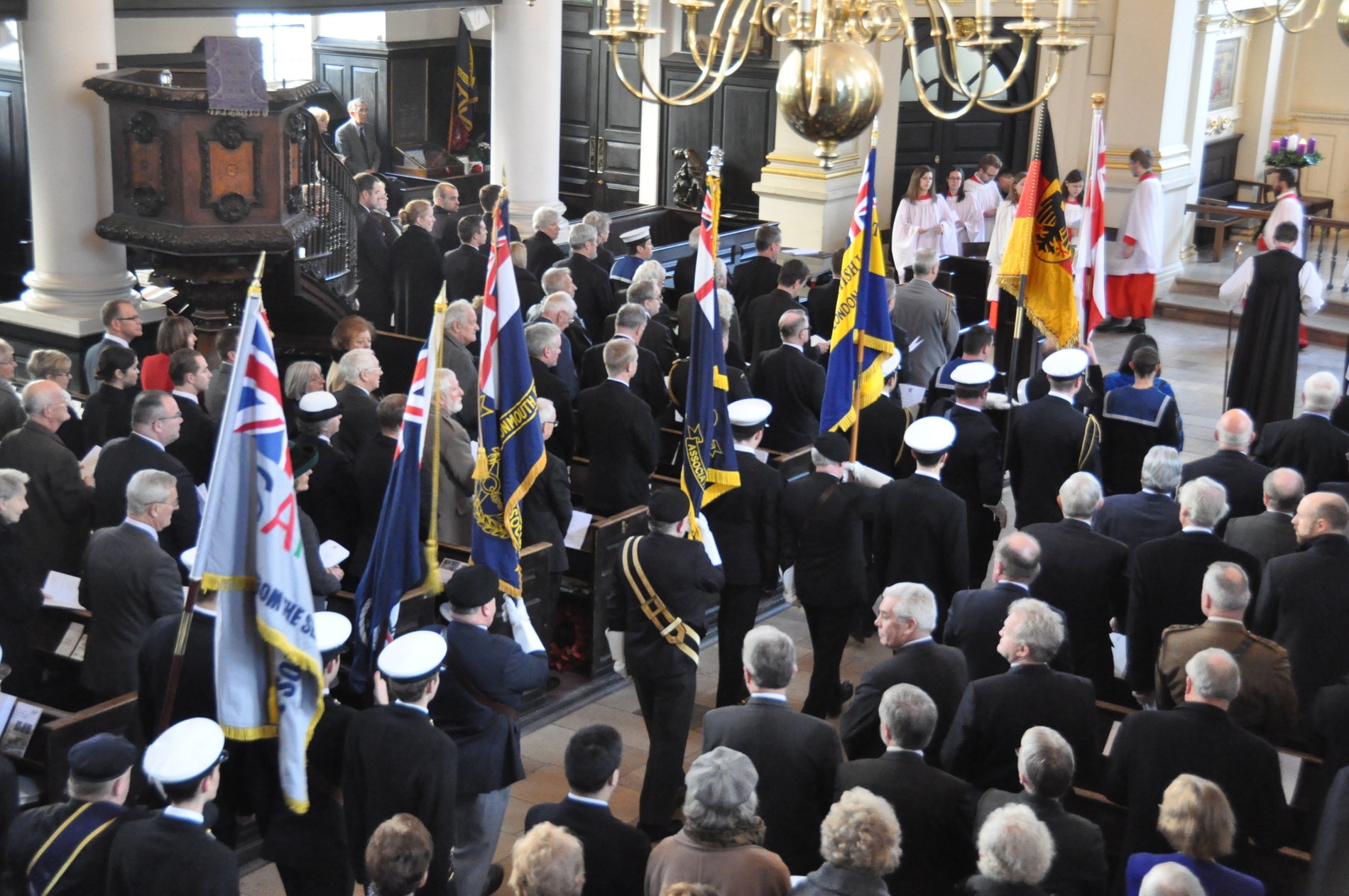 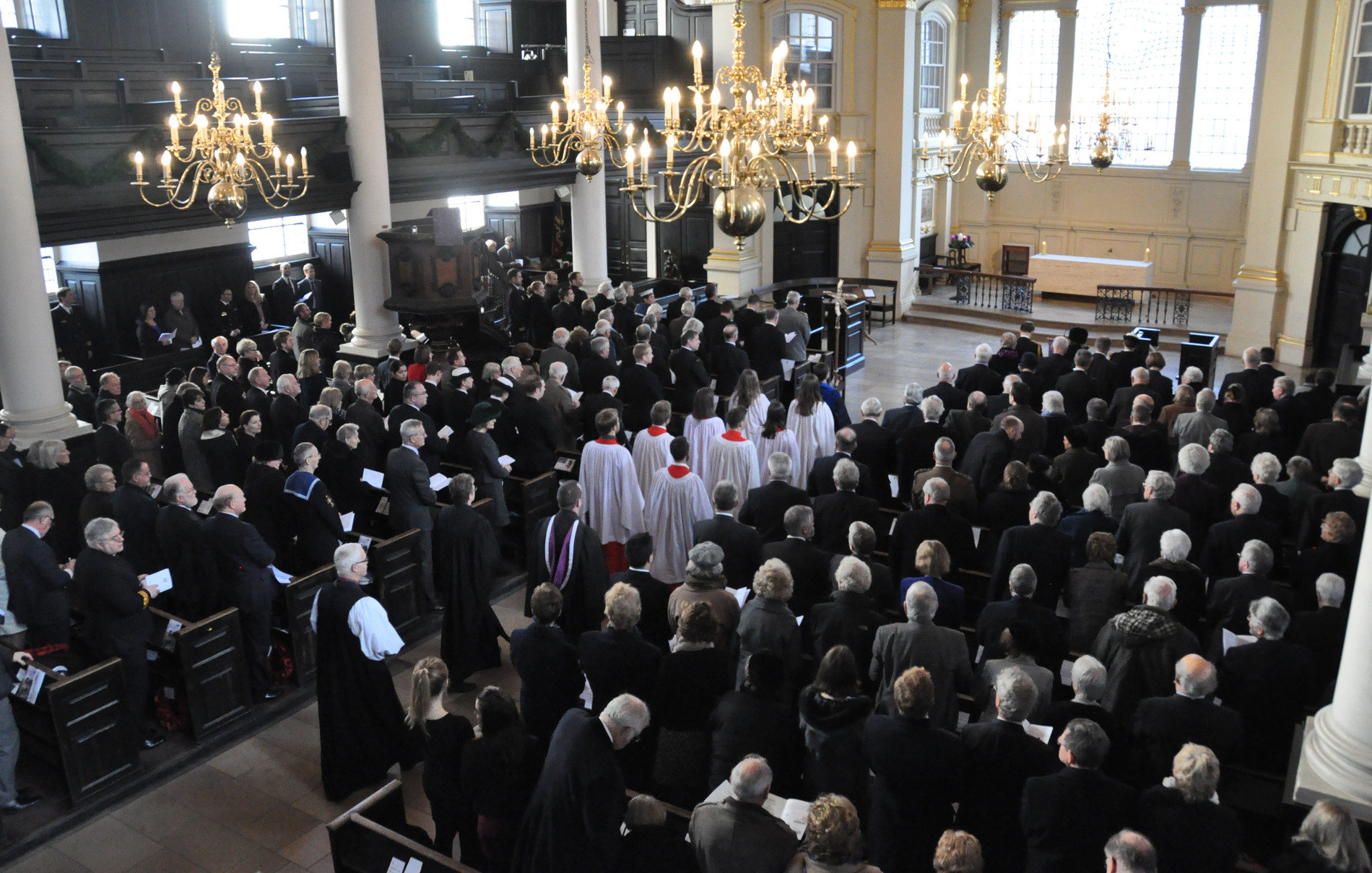 The Last Post and Reveille was sounded by a bugler of the Royal Marine band, Portsmouth. 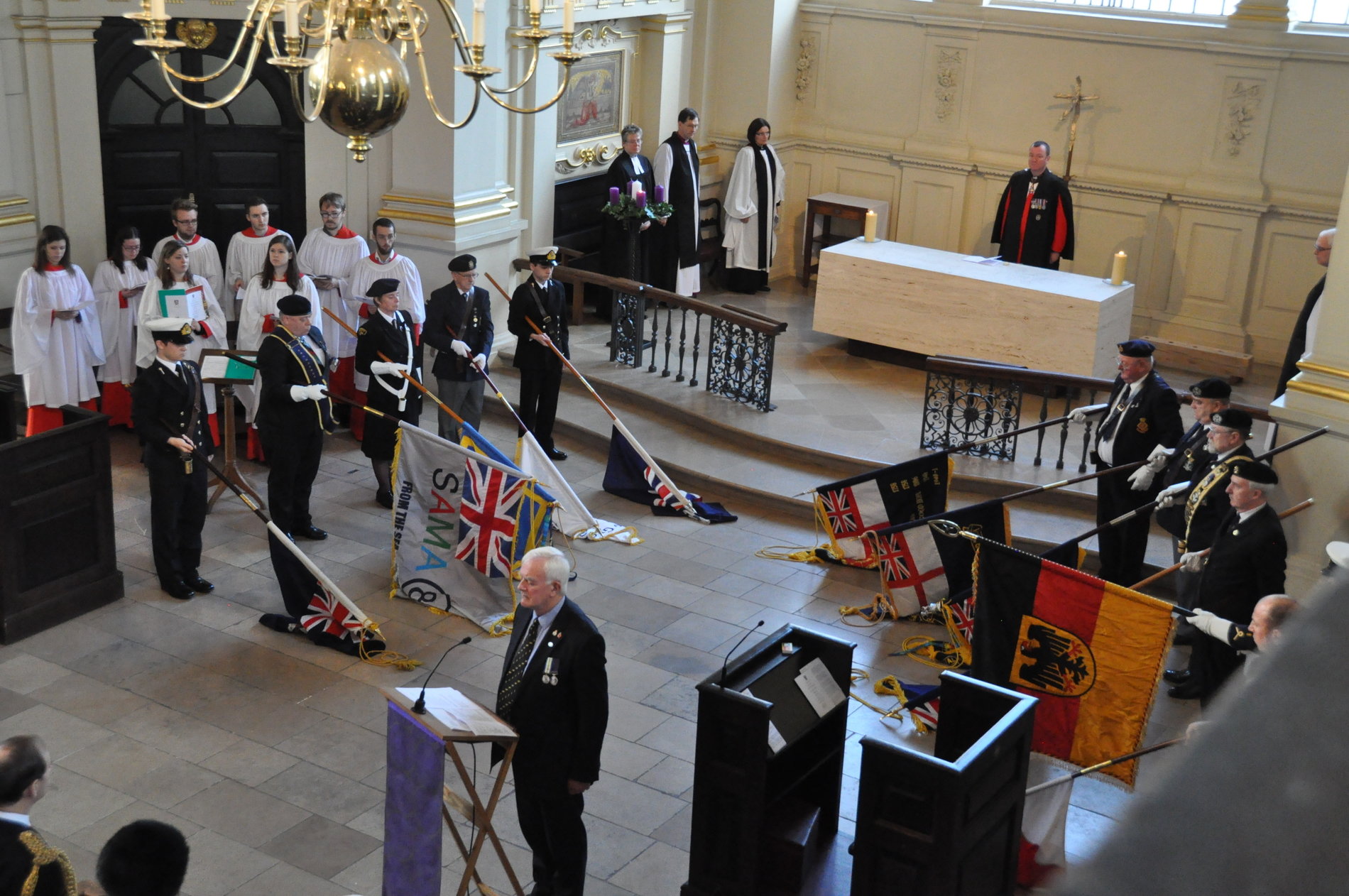 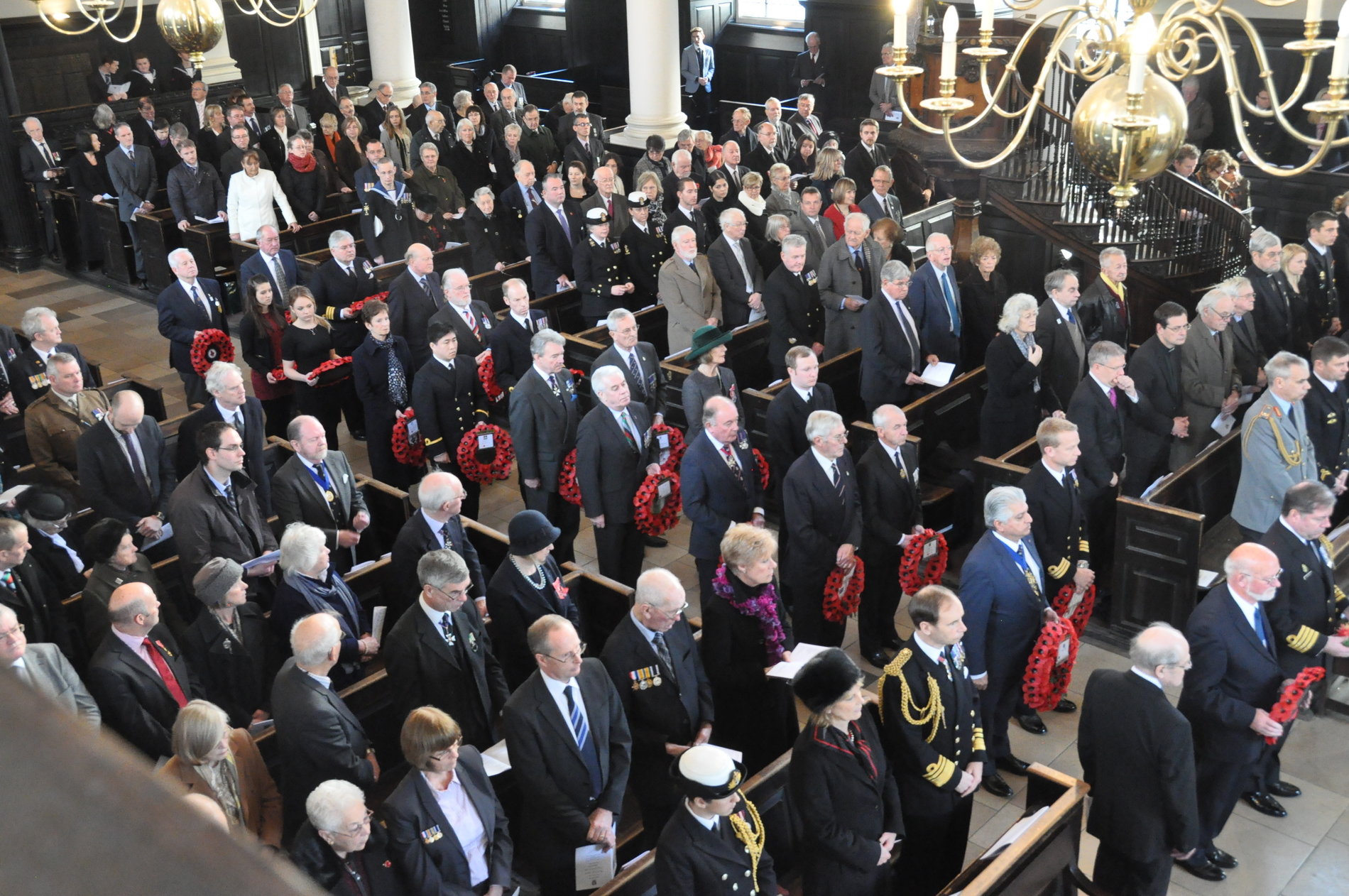 The standards were dedicated by the Chaplain of the Fleet, the Revd Scott Brown CBE QHC BD RN and after the singing of the Naval Hymn "Eternal Father, strong to save" the blessing was given by Bishop Nigel Stock before the standard bearers and their escorts left the church and paraded for inspection by the Second Sea Lord and Brigadier General Hein on the north side of the church. Cadets from the Pangbourne College provided escorts for some of the standards. 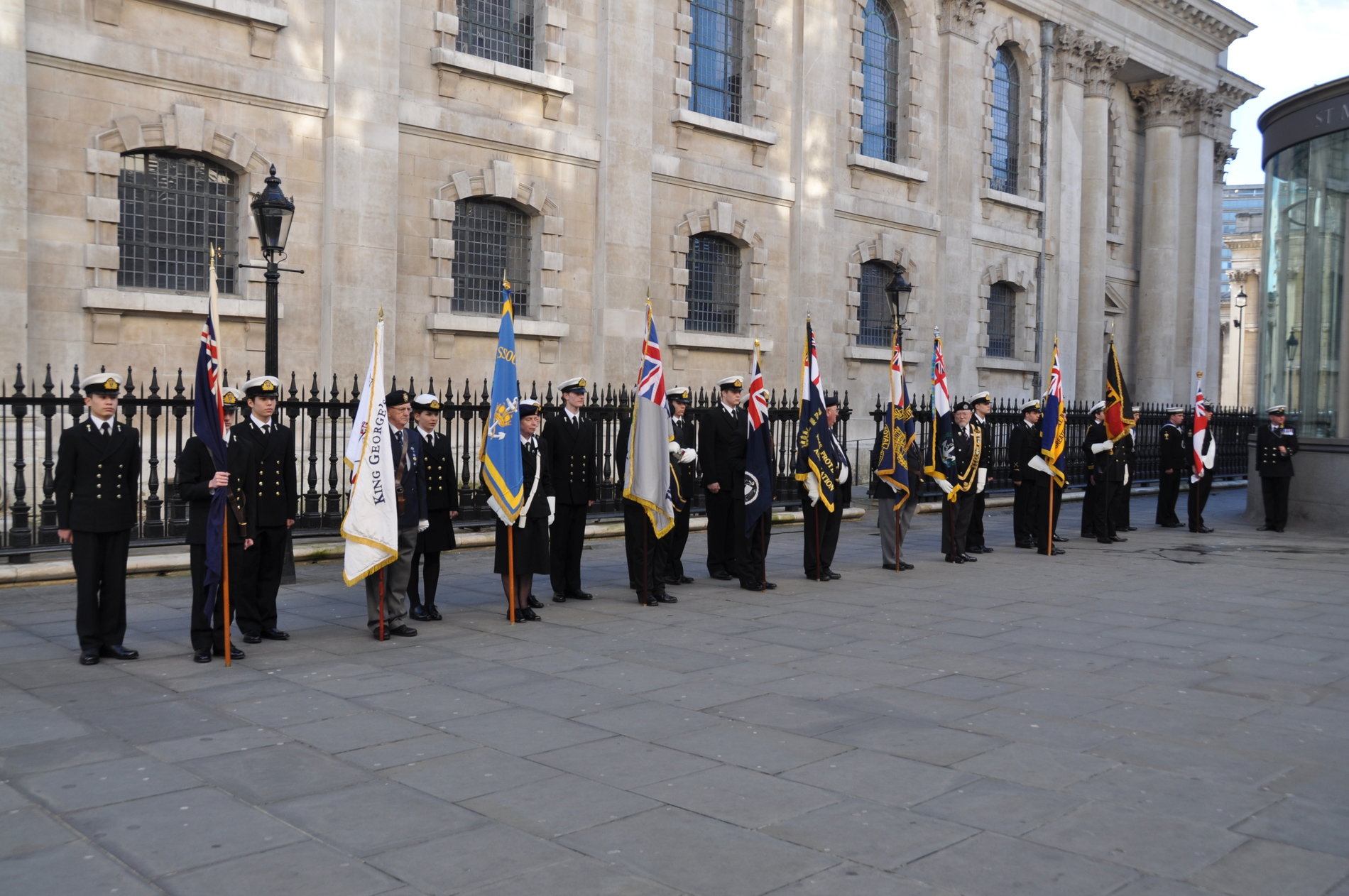 A Book of Remembrance was signed by those attending and this will be sent to the Falkland Islands for display in the Museum in Stanley.

There was a reception immediately after the service for invited guests at the Charing Cross (Amba) hotel on the Strand. Excerpts from the newly restored 1927 film of the Battles of Coronel and the Falkland Islands were shown by a representative of the British Film Institute (BFI).  There was also a slide show display of contemporary photographs of the Islands.