It is with sadness that we heard that our Vice-President Ronnie Spafford had died on 5th October 2014. The following report appeared in Penguin News on 10th October - (picture by John Youle taken in the Falkland Islands in January 1997) 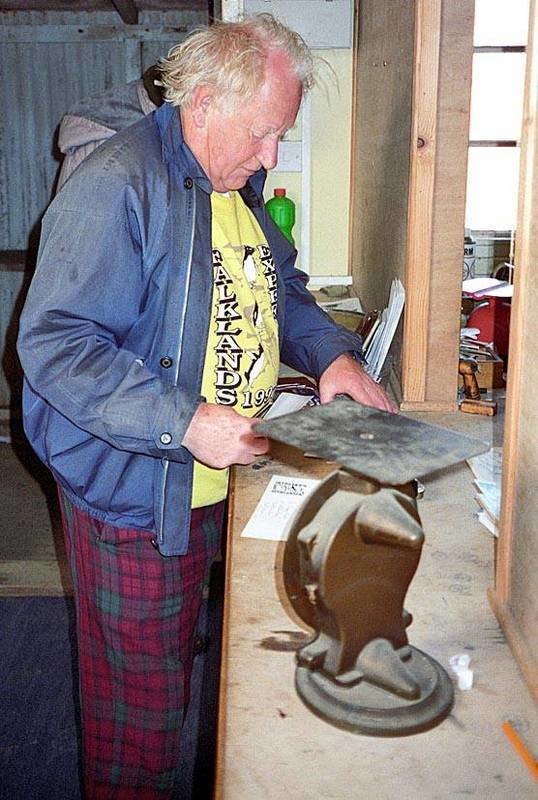 WITH sadness we report the death on October 5, of Ronnie Spafford, a world authority on the philatelic history of the Falklands and a frequent visitor and friend to the Falklands. Ronnie was also a founder member and Vice-President of the Falkland Islands Study Group, author of the definitive work on the Falklands Centenary Stamp issue, early member and later office holder of the Falkland Islands Emergency Committee, Ex-Chairman and Vice-President of the Falkland Islands Association, author of the Falkland Islands Newsletter 1982-1992 and Trustee and Ex-Chairman of Falklands Conservation. For the last twenty years (wrote John Fowler in an article for Penguin News in 2005) one of the sure signs of summer in the Falklands is the sighting in the streets of Stanley of Major Ronnie Spafford, leading yet another small group of eager visitors, usually of mature years, but often wearing, with varying degrees of self-consciousness, sweatshirts of psychedelic hue, emblazoned with the words 'Falklands Experience'. "Ronnie makes us wear them, you know,” one lady confided.He added: "Anyone spotting Ronnie for the first time, ambling along Ross Road, sock less, his feet in the open-toed sandals which he wears even in the most atrocious weather, evidence of a hearty breakfast on his tropical shirt and his remaining grey hair streaming in the wind, might suspect that he is some kind of aged hippy, rather than a former long-term career soldier in the Royal Artillery. ”But what was even less immediately evident from his appearance and benign, somewhat bumbling manner, is that over the years, Ronnie Spafford did more to promote the Falkland Islands than almost anyone else, wrote John, and, "single handedly has almost certainly brought more tourists to stay in the Falklands than any other individual or company.” In the 1960s, observing a fellow officer while away the long hours of evening duty arranging his stamp collection, the idea came to Ronnie that if he resumed this hobby, which he had abandoned as a school boy, it might provide a substitute for more active pastimes, like rugby, for which he was getting too old, and offer an interesting and profitable way of investing the savings he was making from his army pay. Looking for a single country which produced stamps which gained in value and were few enough to be able to aim at 'catalogue completion' he hit upon the Falklands. This grew into an insatiable interest in the people of the Falklands, probably kindled and certainly fuelled for many years by the late Mrs Dickson, formerly of Teal Inlet and mother of Ron and Gerald. Mrs Dickson began to write to Ronnie after the Rev Peter Millam, then minister in charge of Christ Church Cathedral had suggested that Falkland Islands residents should correspond with people in Britain as a means of making the Falklands cause understood. At first, her letters came once a month, with every sailing of the RMS Darwin and then, with the introduction of an external air service, with every plane and although in Ronnie's words it, "became a bit much," keeping up with this torrent of correspondence, he was by this time firmly "hooked" on the Falklands. It was this interest in, and knowledge of, the people of the Falklands that started Ronnie off on 'Falklands Experience', the title under which he marketed his own very personal brand of tours of the Falkland Islands and under which banner he brought at least one and often two groups of visitors to the Islands, every summer from 1989, on a philately trip that might also include battlefield tours, wildlife watching, fishing or diving on wrecks. As a measure of the under-standing his groups gained of the Islands a significant number of his clients left the Islands enrolled in either Falklands Conservation or the Falklands Islands Association. When Ronnie eventually gave up his tourist trips he said he would remain 100 per cent com-mitted to the Falklands and was looking forward to beginning to exhibit his stamps again and to aiding ex-Governor David Tatham in completing the ultimately marvellously successful Dictionary of Falkland Islands Biography project.