FALKLANDS FACTS AND FALLACIES – a new contribution to the Falklands debate. 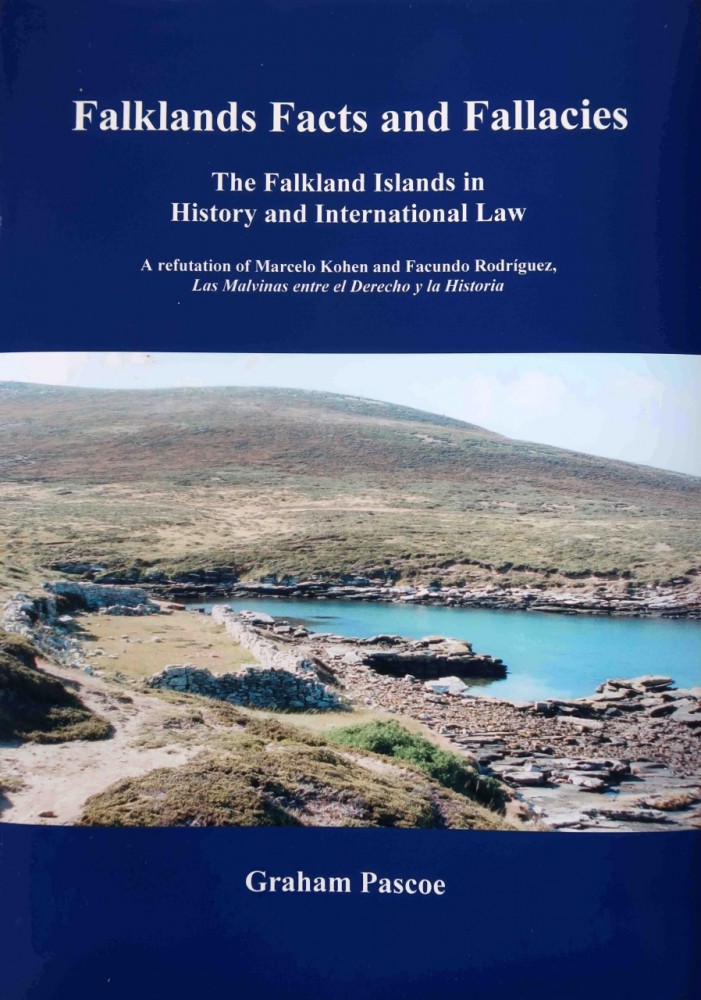 This book by Graham Pascoe describes itself as a refutation of a work by two Argentine lawyers, Professor Marcelo Kohen and Facundo Rodríguez – and that is just what it is.

In 2008, Pascoe and his fellow researcher, Peter Pepper, produced a paper online, Getting it right, demolishing the Argentine case for ownership of “Las Malvinas”. In 2012 they posted a further online paper, False Falklands History at the United Nations, which analysed a seriously erroneous speech by the Argentine UN ambassador, José María Ruda, at the United Nations in September 1964. In 2016 these studies provoked a 300-page book by Kohen and Rodríguez: The Malvinas between Law and History.

Falklands Facts and Fallacies, a copiously illustrated volume of 359 A4 pages, is the reply to the Kohen/Rodríguez book. It is a pretty conclusive demolition job! Graham Pascoe has collected Falklands-related material from all over the world – the reading list in Spanish, French, German, Latin and Dutch is daunting.

In addition he has been able to draw on Peter Pepper’s work in the Argentine National Archives, in particular on the papers of Louis Vernet, which are basic to the history of the Islands in the 1820s and 30s. Pascoe goes through the complicated early history of the Islands and devotes some pages to demolishing the myth surrounding the gaucho Antonio Rivero. Pascoe shows that he was merely a villain who murdered representatives of Argentina at Port Louis in 1833, yet he became a national hero in the eyes of less discriminating Argentinians – so much so that he featured on a bank note in 2015.

Pascoe also demolishes the myth that Britain expelled an Argentine population from the Falklands in 1833, and for the first time ever, lists in full the 82 people at Port Louis on 1 January 1833 – 45 people belonging to the garrison and 37 civilian residents – which scotches the wild claims that there were 100 or even 200 people there at the time. Moreover, he shows that the only people expelled by Britain were the recently arrived, mutinous, Argentine garrison, who had murdered their commanding officer in cold blood and terrified, robbed and traumatised the civilians.

One of the central elements of Pascoe’s thesis is the Convention of Peace, a treaty between Britain and Argentina ratified in 1850, by which Argentina dropped the Falklands dispute with Britain and during the following third of a century, by many acts of omission and commission (described in this book), accepted that the islands were British territory.

The second part of the book analyses the legal status of the Falklands, with particular reference to the evolution of international law and successive United Nations Resolutions and rulings by the International Court of Justice, which together confirm that the Falkland Islanders are the holders of territorial sovereignty with the full right of external self-determination.

The book concludes with an account of the various debates on the Falklands at the United Nations since 1964 – it is a depressing tale of bad history and absurd claims which were – and still are - accepted as gospel by the Committee of 24 and all too many third world countries.

The Argentine customs are unlikely to allow this book to enter Buenos Aires, but it is so thorough and so detailed that no serious scholar will be able to do without it. It is probably too much to hope that Messrs Kohen and Rodríguez will change their views, but they may at least be embarrassed by Graham Pascoe’s stringent analysis of their dubious scholarship.

Due to the restrictions during the coronavirus pandemic, Falklands Fact and Fallacies is currently only available from the website: www.falklandshistory.com for £95 hardback or £45 softback, postage and packing worldwide included.