2020: 50th anniversary of a remarkable homecoming from the Falkland Islands

2020: 50th anniversary of a remarkable homecoming from the Falkland Islands

From humble beginnings, as the rusting hull limped back into the city in 1970 – passing under Brunel’s other engineering masterpiece, the Clifton Suspension Bridge, for the first time – the SS Great Britain has grown into an award-winning visitor attraction, which protects and cares for Brunel’s legacy and the world’s first great ocean liner. 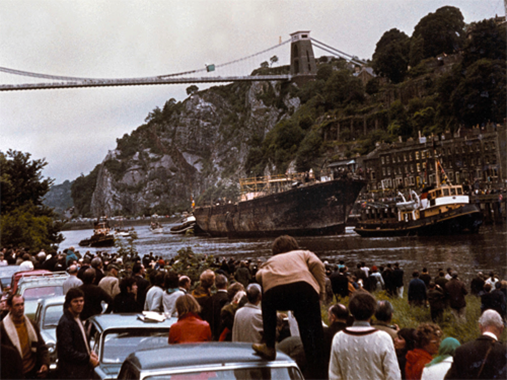 In a massive year for the ship ‘50 Years Back Home in Bristol’ will kick off in April, celebrating the incredible journey the ship has taken, from beached wreck in the Falkland Islands to Bristolian landmark, by telling the story in its trademark inventive style and providing a free outdoor exhibition along Bristol’s harbourside depicting some of the most epic moments (2 April through 6 September).

In July – as part of Bristol Harbour Festival – Brunel’s SS Great Britain will open its arms to the city with an evening light show on the harbour in front of the ship, set to draw communities from across the region and celebrate the ship’s return to her birthplace.

The SS Great Britain’s homecoming journey across the Atlantic is one of the most remarkable and pioneering rescue missions ever attempted - - this spectacle will connect Britons to one of their greatest stories.

Brunel’s SS Great Britain is one of the UK’s top museums, recently winning the European Museum of the Year Award as Europe’s Most Welcoming Museum. The SS Great Britain is now in her original dry dock where she was built in 1843. Visitors can have a full day out, in and under the ship and explore the life and works of one of the world’s greatest engineers in Being Brunel.

Guests are available for interview and include museum curatorial staff as well as volunteers and people involved in the 1970 salvage.